“You’re not enough!” Savage whispers like an ax hacking away at the root of our being. Timberrr! And we’re down, wallowing again in the mud of despair.

Sometimes those negative voices seem to appear out of nowhere. One minute we’re at peace and feel enough in Christ. Then bang! Something triggers, and we sink into accusing voices of insecurity. While sometimes we can pinpoint the trigger that causes the feeling, there are other times we can’t.

Last week a stormy cloud of depression was pulling me down. While I knew I was really, really sad for the survivors of an extended family member’s passing on, I realized it was something deeper and gloomier that I couldn’t quite put my finger on.

I knew I was struggling also with the fact that I was feeling guilty that I didn’t go to the funeral, even though I had a valid reason in that my health and the severe cold prevented me from going out. But I reasoned through that as I know there are other ways we can show our support and sympathy.

Since the funeral was in a church I grew up in – one more of hell-fire condemnation than of the love of Jesus and the one where I was abused by a minister – I’m not sure I would emotionally be able to go anyway. Ever since the time when something broke inside of me and I sunk into a deep depression, my emotional well-being feels shaky sometimes. It took me a long time to rise up out of it, and I ended up taking an anti-depressant. Since then, I have learned it’s ok to protect myself from judgmental people, but still I was feeling down about my failure to go even if I was physically able to go.

I was grieving over a death which made me deeply saddened, yes. But I could somewhat reason myself through these events in life we have no control over. Yet some heavy weight in my heart was plunging me deeper into depression.

I was fighting all these feelings when I wrote last week’s blog post. I was going to just skip a post altogether, but I felt the Spirit nudging me to write anyway. In spite of the heaviness, I tried to dance anyway, listening to what God whispers.

When I shared with my hubby the two songs I included and how they comforted me, he told me about “Greater” by Mercy Me. When I listened to the lyrics, I knew what was bringing me down. It was that ghost of the past, that “I am not enough” enemy, that was at the root of the downward spiral of depression.

Do you feel voices telling you “I’m not right,” “Something’s wrong with me,” or “I am not enough”? Or maybe you don’t even realize they’re there, but you know some culprit from the past is weighing you down?

There is a Voice that is infinitely greater than those lies. A loving Voice that reaches out to us and calls us “Redeemed.” In Him we are enough. For us, He not only took on the full weight of our own sins, but also the ugly voice of shame and every lie Satan or the world taunt us with. We may get battle weary sometimes, but the battle is already won. The ultimate victory is already gained! Greater is the One living inside of us than all the enemies who hack away at the root of our being!

“Greater” by Mercy Me


Praying the loving Voice of Jesus will quiet the storms in our hearts and lives!

Panic roared through my veins as the anesthesia was hooked up. Jumbled thoughts clouded my mind as I thought, “They have my life in their hands now. No, no, no! God has my life in His hands always…”

Then lights out until I woke up in recovery. It’s such a weird feeling, isn’t it? How it seems like only seconds went by?

My ENT doctor cut out a hard white spot from my voice box. She said it didn’t look cancerous, but she’s sending it up.

I often lose my voice with this chronic illness, because harsh coughing aggravates and inflames my voice box. But the worse part of all this are the memory triggers of when my abuser took away my voice.

My brother (he and my sister were also abused by a pastor) said he is coming to understand that our abusers didn’t really take our voice away, but they convinced us they did. This has really caused me to reflect. God gave us a voice that no one can ever take away, no matter how much our abusers convinced us of this. They may have silenced it and squashed it down to an inky black darkness. But even though it’s buried deep, God can resurrect it because He is the one who gave it to us.

Sometimes our voice gets caught in a maze of lies. Lies that we have no voice at all. That our voice has been taken away. That God can never restore it.

But God can and will restore our voices with His immovable, faithful voice of Truth. He can bring our voices out into the light again and restore them to even stronger than before because of what we went through.

“But I will restore you to health and heal your wounds,’
declares the Lord, ‘because you are called an outcast,
Zion for whom no one cares.’” Jeremiah 30:17

“You will be rebuilt; I will restore all your ruins!”
Isaiah 44:26c

“He will redeem them from oppression and violence,
for their lives are precious to Him.”
Psalm 72:14

Praying God will restore our broken voices
and make them even stronger so we can freely praise Him! 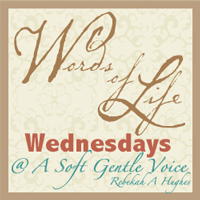