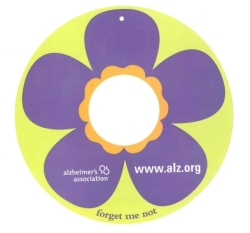 Imagine slowly losing your thoughts and memories. How awful it would be to live with the fear that someday you won’t even remember your loved ones!

I just finished reading a novel that told me more about Alzheimer’s than dozens of nonfiction books and articles on the subject. In Still Alice

, Lisa Genova leads us into the life of a 50-year-old woman who has early onset Alzheimer’s disease. She tells the story from Alice’s point of view in such a powerful way that I actually felt transported into Alice’s surreal world.

Alice gradually lost more of her ability to connect concepts and to remember even how to do simple everyday tasks we take for granted. She had good days and bad days, times where she was lucid and times where her brain would not cooperate. She had placed her identity in being a well-known psychology professor who was applauded for her expertise in linguistics, but she had to re-evaluate her life and where she belonged in her relationships with her husband and her three children. She became someone who was defined by her disease, someone feared and avoided by many of her former colleagues. But in the end, no matter how far the disease progressed, she was still Alice.

What I especially loved in this story is how the author shows a side of this debilitating disease that many people don’t realize or understand. Somewhere in that vacant stare, there still remains a living soul with feelings. And even when the ability to express words or to communicate deteriorates, there is a heightened sense of emotional awareness above and beyond our own. Thinking ability may spiral downward, but no matter how far, each uniquely created person cries from within, “I’m Still Me!”